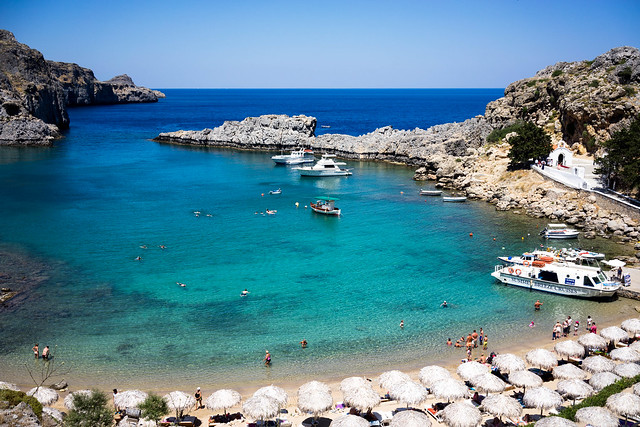 I woke up at five in the morning today and headed to the airport with my beloved wife to fly out to celebrate our wedding anniversary on one of the beautiful Greek islands. As I am typing this on my computer during the flight I do not yet fully comprehend that our vacation is not going to end like most vacations do: two weeks later at the office. That is because earlier in May I inked a decision to voluntarily resign from one of the best places to work in the world. Since I made the announcement I have been predominantly asked three questions:

I would like to share what made me make such a difficult decision. Hopefully, this short reflection helps others in their search of meaning and happiness. Writing also helps me to make sense of my own life and turn ephemeral, and often confusing, thoughts into concrete insights.

tldr; answers are as follows: to discover my true passion, I don’t know for certain, nothing for a while and then prepare for whatever I choose next.

There was nothing rash or sudden in my actions. If anything, I thought about it beforehand obsessively for several years. The balance of scales was finally disturbed last year when I went on a four week motorcycle tour of Norway and Sweden. Time alone on the road did not give many opportunities to think as I was preoccupied with looking for the fun roads, food and places to stay. But reflections, insights and thoughts stormed their way into my mind in the aftermath, as I reached home. Despite the engine roar, the twists and various incidents I felt calm and free during my little adventure. I felt no worry. But upon returning to the daily work routine the contrast was so stark that my hands began to shake. Stress has quickly re-established its elevated residency which I had not ever noticed before the trip. The background stress is toxic to the body but it is difficult to detect, just like the frog can’t notice increasingly hot water it’s in until the poor creature boils to death.

It is then that it became obvious to me that I must change either my ways of living or my attitude if I want to exist harmoniously and happily. It something easier said in hindsight as there’s rarely a clear unambiguous signal to act in our complex entangled lives. History does not exist while the events are still unfolding. Similarly, factors and reasons rarely come together as neatly as they seem in the retrospect. Furthermore, real decisions usually have a steep price to pay and require to give up something valuable in return. I value and cherish many things that my way of living has given me up to the pivotal moment. Few other have had such gifts from the lady fortune. I found it difficult to seek understanding and support as there are few people I know who wouldn’t label me a self-entitled ungrateful and wasteful bastard.

Fear is the other force to hold back. Fear held me a prisoner for years. One expects fear to be pretty obvious though I found it anything but. I have some credentials to back up my stance. In the last couple of years I skydived AFF (which means I did the first jump solo, unlike being strapped to another skydiver in a tandem), rode down-hill mountain bike trails, rode a 200 horsepower motorbike around a race track and did some other feats considered scary and risky by (mostly incorrect) common sense. I know what the obvious fear feels like. The fear of change is different: it lies dormant like a crocodile that snaps its deadly claws upon the motion of potential prey. Only in the case of fear the prey is any kind of uncertainty and change. Human nature is soaked with the poison of fear and we don’t realize it.

What was I in? By any objective measure I lived in a paradise: being part of one of the best companies in the world that has shaped humanity and will do so in the foreseeable decades. The compensation, perks, free food and amazing office facilities are nothing to complain about. Nor do humane bosses, tolerant atmosphere, intelligent colleagues, space for initiative and considerable freedom to choose what to work on. Yet something has been amiss from the head start: passion. From the moment I started I did not enjoy what I was doing. I struggled initially but over time I learned skills that made me adapt and grow tolerant. I even excelled by the prevailing performance standards. At times there were assignments that got me really excited but 80% of my work felt empty.

I have not spent the time lazily complaining about the circumstances. I used the opportunity to find meaning outside of profession. I tried out more hobbies than I have toes and fingers combined. I studied and worked on side projects and ideas. I devoured in an intimate relationship with my then-girlfriend wife. I traveled. I read ferociously. I went beyond the confines of my nature-given introversion to meet people and make friendships. I pursued spirituality. But there is only so much time in 24 hours. Dealing with work that does not excite saps you of energy and eventually shrinks the energy capacity. I had genuine opportunities at the company to change into a line of work that is closer to my interests but failed to seize them due to unfortunate combination of reasons. By now I have got very little energy left and I definitely couldn’t pull two jobs at once which is somewhat a prerequisite for a successful transfer. I don’t see how passion can be compensated. I feel that no amount of hobbies, relationships and interests can compensate an occupation that is out of line with one’s values and passions.

Despite what the articles and books say discovering passion is not that obvious. The typical premise is to follow one’s goals and values but if it was so simple there wouldn’t be so many confused and lost souls. Personally, I find the discovery process the most difficult. I don’t understand how anyone can know his values and passions without a serious deal of reflection work. I certainly don’t believe that one can substitute the hard work with a half an hour exercise. Without trying out various things it’s not possible to determine what one is really excited about. Discovering passion is a process of trial and error. Discovery is about exploring further what little we have experienced so far along with finding new turns. It is not unlike navigating a maze.

One serious obstacle to the process of self discovery is the denial of truth. While it’s not possible to know what our passions are without trying we can seriously inhibit progress by refusing to pursue our callings. After graduating from university I chose to work outside of my field of interest. To be honest, I wasn’t particularly sure what of the many specializations in my field I wanted to pursue either. But ever since I began to work I did not get closer to finding that out. Instead, I thought of hundreds of reasons why pursuing passion isn’t worthwhile. With the right financial disincentives failure to ever return on the path of self actualization is almost guaranteed.

It is also puzzling to me why people living in a westernish modern world rarely ever consider taking a long break from work. We live in an era of unprecedented productivity and economic growth. Yet most of us sit chained to our desks for 8-14 hours a day as if we were coal miners of the bygone centuries. It is impossible to perform uninterrupted quality intellectual work for more than a few hours a day. Somehow we conveniently ignore the truth and let our minds rot while we make ourselves look busy and let the hours pass instead of perhaps lifting some weight to make our backs stronger or learning a new skill. Nobody benefits from the idle hours. It’s the same with ridiculously short vacations. Two weeks of vacation cannot replenish an exhausted body and mind.

Don’t wait to take a break for too long. If you’re not feeling mostly passionate about what you do chances are you will eventually burn out. There’s anxiety and depression around the corner and broken relationships and career prospects (who wants under-performers back?). Instead, plan ahead and do it gracefully: go out with a smile and respect, with friendships and good memories. I think I waited a tad too long but at least I did not experience a complete break down. I feel drained professionally but my inner drive is still alive and ready to kick in a high gear after some greasing.

With all of what I have that said, I don’t regret the choice I had made years ago. If I had the opportunity to go back in time and make the choice again I would have picked the same option. I believe I made the right decision given the circumstances. I don’t blame anyone for the final outcome. If anything, I’m grateful to the company, to my bosses and to my colleagues. I strongly believe that the same job could be blissful and highly rewarding under the right mindset and circumstances. I believe life is not meant to be a perfect well rehearsed sequence of “nexts” and I have very few expectations about the future. Nobody but me has an obligation to make the most out of my life.

Quitting a great job and taking a long break is the most difficult decision I made in my life so far. There’s so much I would like to change and to learn and to experience! It’s time to recharge, instill new helpful habits and to prepare for whatever I choose as my next challenge.