Around Christmas in 2015 I received doctor’s diagnosis that my left tibia bone is fractured and that I can’t run for the foreseeable future. Of course, I tried against all reason but the persisting pain made me realize it’s in my own best interest to let it heal peacefully and not break it completely. Luckily, I discovered that cycling and swimming don’t hurt at all. I suppose that’s because the load spread is altered and tibia is not as stressed. 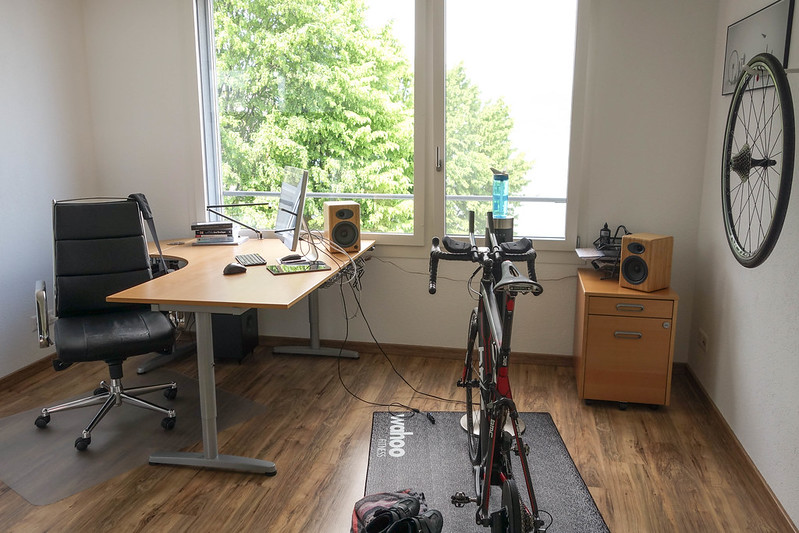 I decided not to lose any time and began training straight away. I have setup an indoor training “lab” and rigorously followed a training routine three times a week. Although I have been an avid cyclist my level of cycling fitness could have been ranked as “beginner”. That’s because I’ve had plenty of distance under my belt but insufficient endurance to sustain intensive effort necessary in competitive cycling. The training program has slowly come to a successful end and I would like to showcase my setup.

I previously found the idea of indoor cycling trainers a boring pasture. However, training indoors has its merits. The biggest advantage I see is the possibility of structured training where the load of every training session is carefully chosen to stimulate improvement in the areas that need it the most. It is very difficult to go for a ride with friends and keep a specific tempo. With an indoor trainer it’s possible to define fine-grained intervals with specific intensity. There are training programs for improving overall cycling fitness or, for example, improving climbs or sprints.

Of course, there is also the convenience factor. With an indoor trainer I have no excuse skipping a training session due to bad weather. It’s always available and takes no time to get started with it.

But what really attracted me are the so-called smart trainers, like the wahoo Kickr that I purchased. The smart trainers are dynamically controlled by software so the resistance is continuously updated. Smart trainers can simulate changing terrain and most importantly let the user focus on cycling. With the regular “dumb” trainers the user must adjust resistance manually. I think I would get tired of it very quickly and would definitely cheat by not being timely in amping up the difficulty. 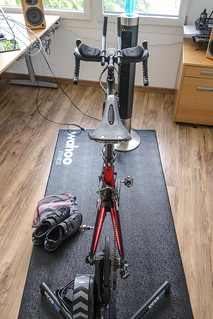 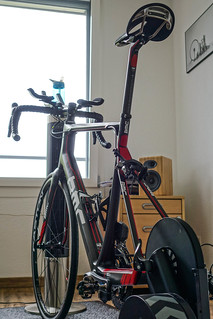 There are various tools for controlling smart trainers. Some run on Android and iOS devices while others require full desktop OSes. Either bluetooth or ANT+ wireless protocols are used to interface with the trainers. I purchased an ANT+ adapter for my computer for the purpose of controlling the smart trainer and also for accessing data from a heart rate band and a power meter sensor on my bike. 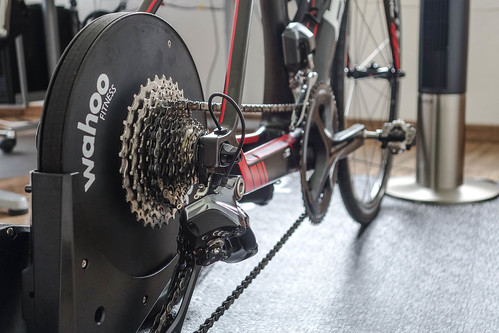 The “killer app” for me is surely Zwift. It’s a well-implemented detailed immersive 3D virtual cycling world. Zwift is capable of controling smart trainers and simulating terrain. For all the user cares he is presented with a detailed simulation that brings variety and much needed distraction to otherwise boring workouts. Zwift is a open-world multiplayer game with other cyclists riding along. Zwift integrates nicely with Strava, here is a couple of my own workouts:

Zwift also supports structured training. There are multiple training programs to choose from. It’s also possible to create a custom one. I chose a 12-week program aimed at increasing overall cycling fitness and specifically improving the Functional Threshold Power (FTP). With ilnesses, travel and other commitments in place the program actually took me more than 4 months to complete.

I have complemented the setup with a webcam mounted on a tripod and connected to my mobile computer. This allowed to see my posture and make continous corrections. A mirror would work even better but there is no place in my room for one and I already had all the components to make a “high-tech mirror” solution work. 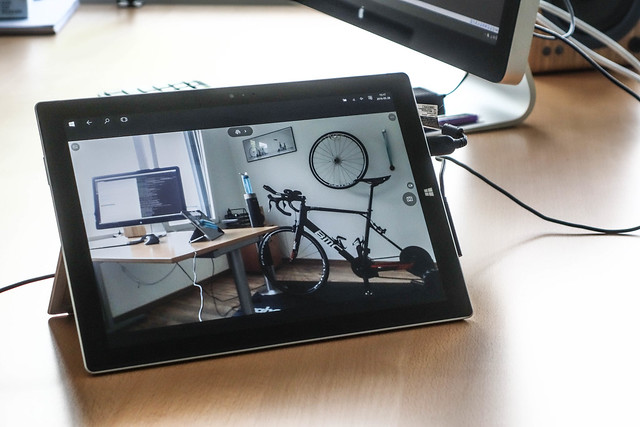 This is how I see myself during a typical workout (videos are not focused very well but the idea should be clear):

Speaking of complements I discovered a few additional pieces of technology I consider vital for training and worthy of an immediate purchase. First of all, a bicycle computer or a training watch equipped with GPS and ANT+/Bluetooth interfaces. I went for both, choosing a Garmin 920XT watch and a Garmin Edge 500 cycling computer. These gadgets track workouts and allow the user to see his progress and make corrections. Having these devices is a luxury that had been available only to professional athletes in the past. Basically, it’s like having a personal coach watch over your shoulder every moment.

The reason I own both is because a cycling computer is convenient for glancing at many fields at a time, without taking the hand off the handlebar. I use the cycling computer exclusively for viewing data. In fact, I bought it used at a bargain price. I don’t cosider fancier products worthwhile.

Finally, a power meter is becoming increasingly popular. I’m going so far as to say that a power meter is a complete must, especially if the user is an amateur interested in racing. A power meter basically quantifies the effort the user is currently putting out. It takes guessing out of the training. With a power meter I can adjust my power output and effort during a ride. For example, in a race I could adjust power output depending on the course to avoid overstrain. I could immediately see if the current effort is sustainable or not based on past observations. Smart trainers come with built-in power meters but I’ve added a relatively inexpensive Stages power-meter for upcoming outdoor rides. 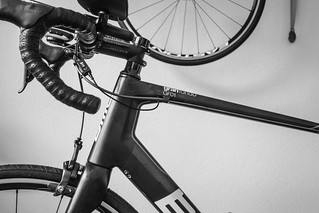 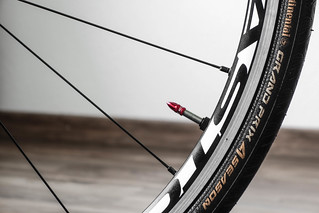 With the program almost finished what do I plan to do next? My tibia has recovered and I’m almost finished with a 4-month swimming training program. I am going to develop a new plan for the next 3-4 months. With the summer here I’m definitely going outdoors but I’ll combine the outdoor rides with more structured indoor training to hone some of the skills, like climbing. Training ain’t easy but I get lots of satisfaction and joy out of it.