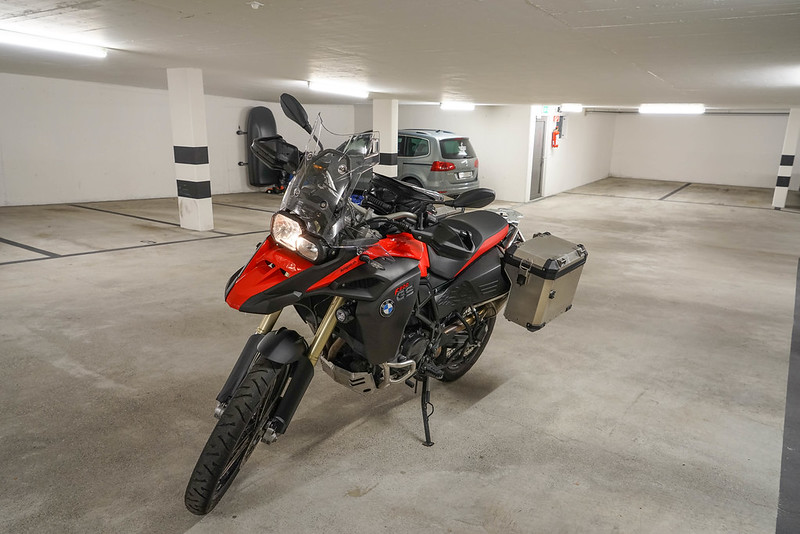 Yes, my beloved motorbike is gone to another owner. This leaves me with zero motorized vehicles. At the outset of 2016 I have decided to part ways with a BMW F800GS Adventure I had purchased brand new about two years ago. With a little help from my matchmaking the beamer and the new owner successfully found each other and left the garage not to be seen again. I’ll keep fond memories of the wonderful spaceship-like machine that enabled an epic and life-changing 8000Km tour of Northern and Central Europe and left positive emotions. I don’t intend to completely quit riding bikes but I have no intentions to own another motorbike in foreseeable future.

The sale came as an indirect consequence of a sabbatical I have taken last year. I had plenty of time to reflect on my ways of living and to reassess whether the things I did brought me joy and contributed to my well-being. In fact, the revelation that I don’t actually enjoy motorcycles that much came rushing to me, along with other thoughts, as I was laboriously approaching snow covered peaks. That very moment I became very honest with myself. How many other hobbies and directions was I pursuing that actually left me disengaged? What kept me blind in the face of growing dissatisfaction and emptiness? The inquiry has set me on a path to slash and eliminate everything from my life that’s not essential. The many hobbies I had were the first obvious target.

How did I stumble into the world of motorbiking? I was fascinated with bikes and being always told that bikes are dangerous and forbidden by everyone around me set the desire in stone. Plus, the ubiquitous images of fancy bikes and ride reports don’t help an impressionable mind running with wild fantasies. I feel these contagious fantasies are often at the root of many misguided pursuits and a heavy weapon in marketing’s arsenal. The desire to ride bikes for me came as a desire to become the images I have seen. It was a desire to become something else. And in there lies the problem. It is not the desire to be something or someone but the actual joy of doing that drives positive pursuits. When an activity brings true joy it shouldn’t matter what kind of image it invokes. Many non-bikers don’t know about “waving” - a subtle gesture every motorbiker does when seeing another biker in the opposite lane. The custom immediately makes bikers, especially newcomers, feel part of a club. Seeing other bikers off-the-bike I regularly caught myself thinking that I can’t wave and, hence, demonstrate to everyone around that I’m also a biker. It almost felt I’d like to wear some kind of badge that would make everyone realize I also belong to the club. And the same thought ran through my mind when I was doing one thing but seeing others do something else. Like hiking but seeing mountainbikers. Or touring and seeing road bikers blaze by.

But during the same pivotal mountaineering tour, maybe for the first time in my life, I felt I couldn’t care less about other activities I wasn’t doing then. It didn’t matter anymore if I’m perceived “correctly”. I cared only for what was directly in front of me. And I truly enjoyed the activity for itself. Not for the gear or the popular images of famous climbers or explorers. I think that a dichtonomy for “being” versus “doing” fits in nicely. “Being” is like striving to become something: a motorbiker, a badass climber or an iron-strong athlete. “Doing”, on the other hand, concerns itself only with the activity itself: riding, climbing or training. “Being” sets us on an infinite and empty chase for secondary attributes, like possessions, never deeply satisfying. Many an activity in “being”-mode consists of little but internal complaints and racing thoughts towards the next step or level, whatever that might be. “Doing”, however, focuses on the activity and nothing else. “Being” makes one worry if he’s doing enough. “Doing” concerns only with the present – mastery is gained eventually. I don’t think it’s possible to judge easily if someone is in “doing” or “being” mode – that could only be revealed through honesty with oneself. I’m also not saying that ambition and possessions are unnecessary or somehow evil. In fact, it feels great to find oneself in a need of a new shiny thing that could be put into immediate and useful purpose.

Driven mostly by the “being” outlook I followed a long list of interests, many of which I have since given up. Frankly, some of the pursuits transformed from “being” into a “doing” mode, such as hiking/mountaineering and photography. Other hobbies went the way of dodo. And boy, I had lots of those: climbing, mountain biking, road cycling, rc helicopters, motorcycling, weight lifting, wind surfing, not to mention various side projects and pastures I don’t recall anymore. Not only were these numerous hobbies unsatisfying but they kept an additional pressure to keep up in all of them. Any free time would be a source of contention and uncertainty – what should I be doing right now? Should I train mountain biking skills? Should I practice new photography techniques? Am I doing enough of this or that? Motorcycling actually came as a symptom. As a typical weekend approached I would almost never choose to ride a motorbike over riding a bicycle. That was a clear signal that motorcycling is not my thing and that I’m knee-deep in unnecessary struggles I produced myself.

I mostly see extraneous hobbies as a distraction from dissatisfaction now. For me personally it came from a disconnect between what I was doing everyday at work and what I would rather be doing. Money buys a lot more distraction than any available time can offer. It’s all to easy to fall into a trap of visualizing joy after viewing colorful magazines, website and ads. But no amount of stuff can compensate the emptiness and discontent. I am extremely grateful for an opportunity to stumble upon all these realizations and make a change in my own course. I have just one hobby now and that’s triathlon. I came into it through love of cycling and trying my hand, or should I say legs, at competitive running. How does one find what truly interests him? As contradicting as it may seem but trying out things is the only way to figure out. But it’s important not to chase everything at once. There’s nothing wrong with giving up a hobby and replacing it with another. Indeed, one of joys in the world is its diversity. Finally, there’s the attitude – not to take any of it too seriously. Nobody truly cares about one’s interests and pursuits. When something clicks and the activity brings joy everything else will eventually follow – passion, ambition and, with good fortune, results.

Do I regret the motorbike purchase? Not a bit. I thoroughly enjoyed touring across Europe. Just that one month-long ride was the gateway into my decision to take a sabbatical and change my life. Due to lack of confidence and experience I couldn’t stomach renting a bike at the time – I was certain I will drop it. However, I haven’t actually dropped my bike once! I improved significantly as a rider and with many dealerships in Switzerland offering rentals I can now simply grab a bike whenever I fancy without paying out regular expenses associated with ownership.