On June 11th I have entered and completed my first bike race! About 4 months ago, as I climbed off my bike after a training session, a surge of endorphins pushed me to call Ilya to sign-up for a team race. The race consisted of 1km swim, 90km bike and 21km run. I have regretted the decision shortly thereafter but it was already too late to bail out… 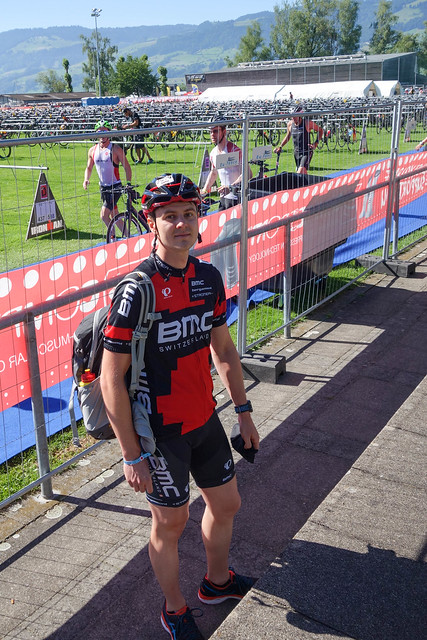 As I wasn’t sure (and rightly so) about my running injuries I gladly volunteered for the bike part of the race. Ilya accepted the swim and Andrey ran. Ilya actually completed the same Ironman 70.3 all by himself two years ago which is an amazing feat.

This year I began training in February. I wasn’t planning on any bike races and was aiming at a half-marathon instead. That didn’t go as planned. Compared to last year my cycling performance has worsened noticeably but I haven’t dedicated as much time and effort. I’m still not completely sure how much time I want to put into training. I like riding bikes for its own’s sake and I don’t want to kill the joy. As the race approached I got to spend more time with very enthusiastic riders in the Zurich/Zug peloton group. Many members put lots of distance every week so I was getting understandably anxious. I wasn’t sure I’d able to keep up the race pace and complete the bike leg in the alloted time. Sure, I have the endurance to ride non-stop for 420km but a race requires a certain tempo and I’m simply not into speed during my usual rides.

Gladly, my worries turned out to be unfounded. The official cut off time gave me more than 4 hours to complete the distance. Ilya has also gathered extra minutes with his fast swim. Regardless, I finished the leg in about 3 hours 20 minutes. There were two laps, each 45km long with a total climb of 1100m.

I also wasn’t nervous at the race itself. I felt a lot more nervous when I participated in my first half-marathon. There’s a lot to be said about our outstanding support group. Not only my DW and Ilya’s familiy came to cheer for us but also John dropped by before the race: 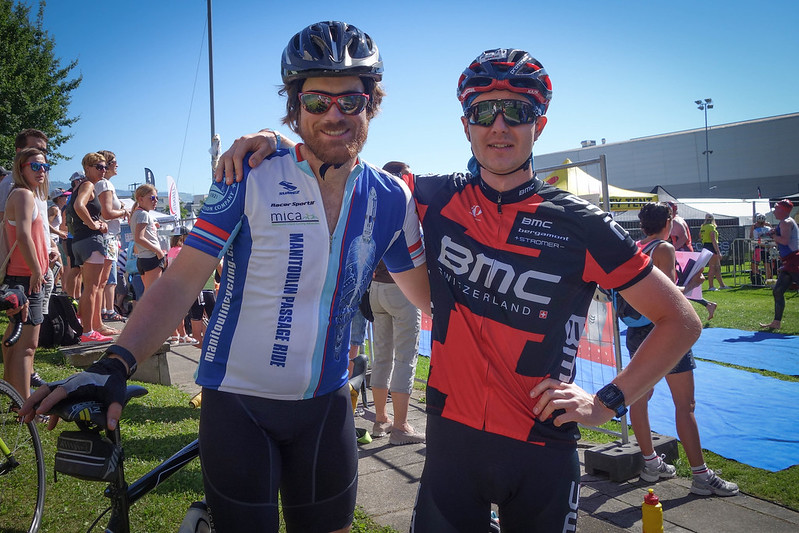 The race itself didn’t present any nasty surprises. I rode the loop before the race once so I knew where are the climbs start and stop. That has proven to be immensely helpful. I finished the first lap relatively quickly at roughly 1:35 but then the cramps started to set in. For the whole second lap I was combating the onset of cramps. Cramps felt very close so it was a delicate balancing act. I don’t know why this happened as I drinked plenty of isotonic. Perhaps it was still too much for the body or maybe my magnesium stores were depleted. It’s impossible to know for sure.

The climbs were not difficult at all. I started riding significant ascents about 2 years ago and Switzerland presents no shortage of riding possibilities with its numerous mountain passes. I’m not fast on climbs but I’m steady and I have the stamina. I noticed that I passed more athletes on the climbs than on the flats. On the flats I’ve been overtaken a lot (and by the same athletes that I had passed on the climbs). I feel my body is capable of more than I can force it to so there’s plenty room for improvement.

The bike performed exceptionally well. I was wise enough not to change anything major before the race (handlebar tape notwithstanding). There’s nothing I would have changed. Fancy upgrades, such as carbon wheels, would not have improved my time even the tiny bit. I am, however, currently contemplating a cassette change from 11-32 to 11-36 so that I could take this machine to bigger climbs. I can confidently climb 2600m+ per day (maybe more) but I need sufficient gearing (like on my trusted Salsa steel tanker). I am not sure I could do mountain passes on my road bike. 11-36, by the way, is not officially supported by road rear derailleurs but, as always, there’s a way around. I’ll write a separate post about it.

We were allowed to cross the finish line as a team despite the fact that only Andrey ran: 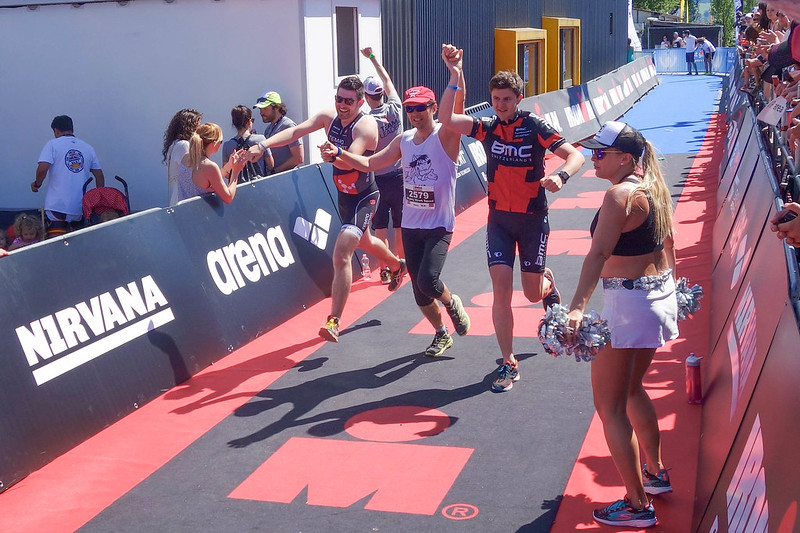 Our team was called “Mighty Hawk Squad” and we proudly represented Latvia: 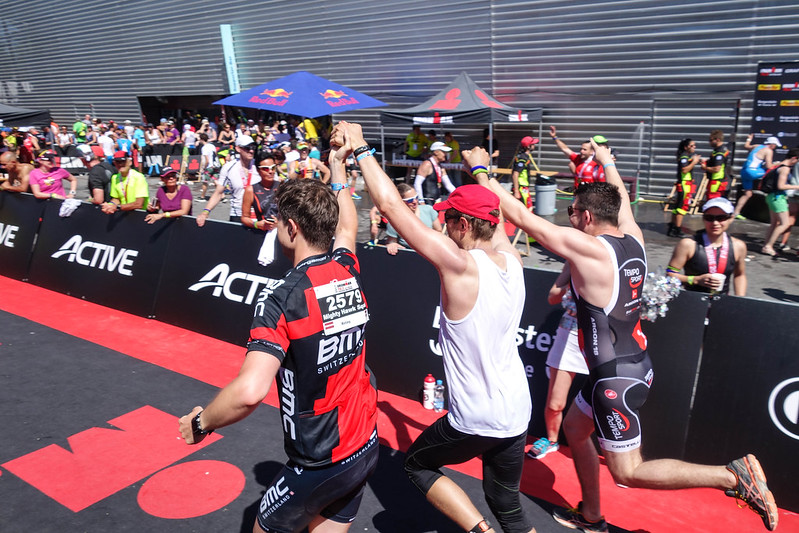 Champagne for the happy finishers: 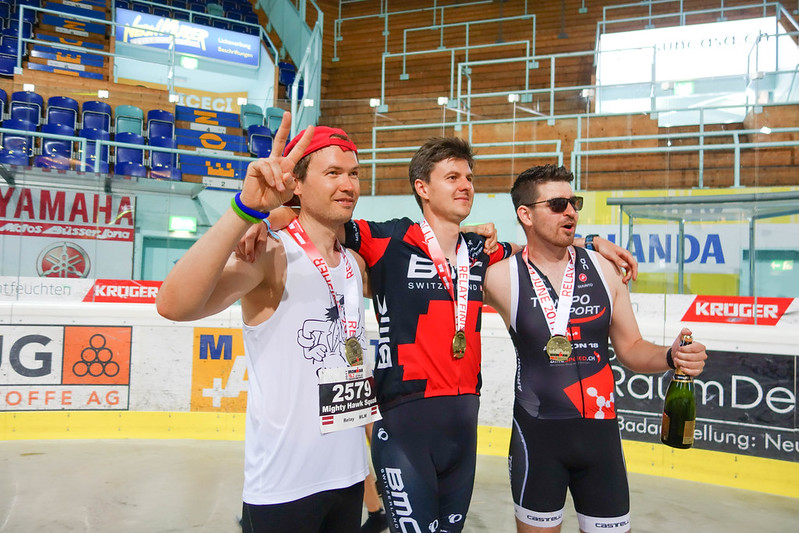 The race was full of joy, high spirits, pain and satisfaction. I am glad we got together and did it! I’m looking forward to future competitions and team events.