I am not a peak collector by any stretch of imagination. Indeed I avoid “the best” like plague. I leave “the best” for the unsuspecting tourist crowds and boastful blabbers. But the fact is that I’ve climbed to the highest altitude in my life. And I’ve already paid my dues by feeling the wrath of Gods – reaching the peak left me untouched and the corresponding up-and-down motions were anything but mindful. Yet the purpose of this 2-day mountaineering trip has been fulfilled – I am now formally skilled in the basic skills of alpine walking and climbing. 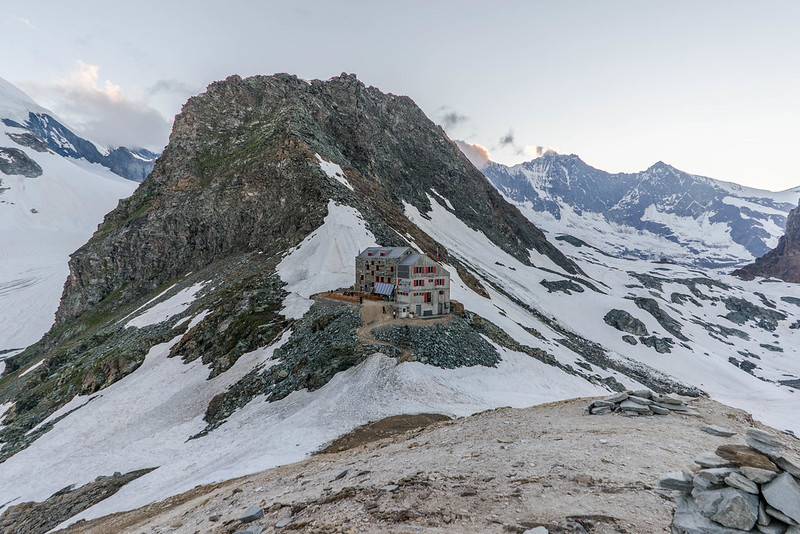 Ever since my first true alpine adventure last year the pasture of trekking mountains and glaciers attracted me. I have not gone crazy about it and I don’t currently have ambitions to get exceedingly great at it. Instead, hiking and mountaineering remain for me a gateway into a state of mind where little matters beyond what’s immediately in front of me. I don’t care about having the best gear. I also don’t care about perceived challenge of this or that route. And I’m definitely not going to train for it, say, by attending a climbing wall regularly.

With that said when I saw an opportunity to attend a 2-day mountaineering tour at SwissAlpineAdventure aimed at educating beginners I couldn’t pass. A little bit of structured knowledge and training couldn’t hurt. The tour brought me back to region of Valais. Our starting point was the town of Saas Fe. The planned itinerary was not difficult. The goal of the first day was to get acquainted with the basics in a sandbox environment and then ascend Allalinhorn (4027m) the following day. 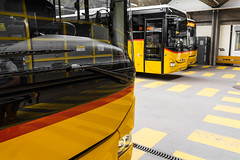 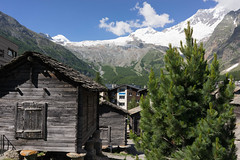 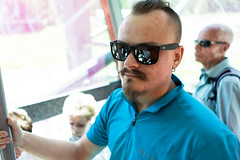 Our schedule was generous with late starts, plenty of idle time and lots of help from lifts and cable cars. We didn’t come up all the way from the valley. Instead we arrived by cable car to Felskinn station (3000m):

The way from the station to the Britannia hut (3030m) was a short and mild stretch of slushing through snow. Our guide from bergundtal Stephane Tuni engaged us regularly by educating about the hiding dangers. 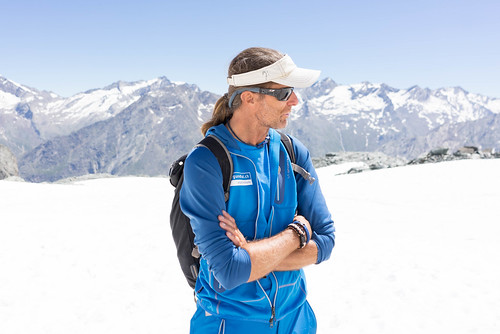 There’s a baby peak Klein Allalin (3070m) opposite the Britannia hut which we have used throughout the first day to practice. We learned how to correctly hold the axe, how to tie the ropes and how to safely walk with crampons. 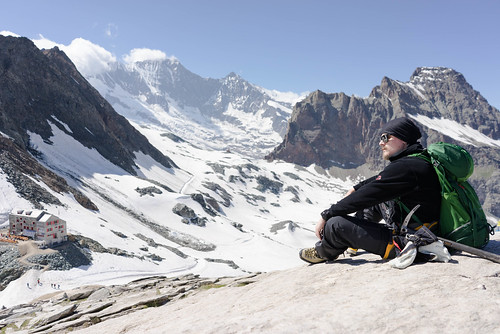 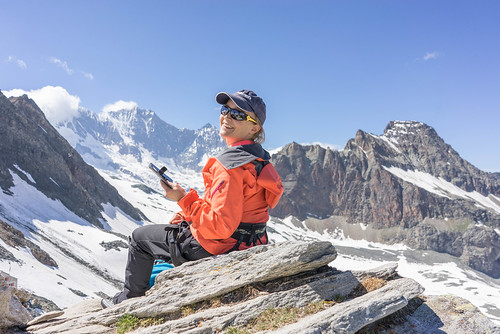 The views from Klein Allalin are grand: 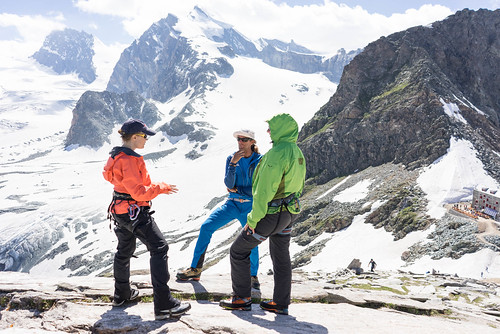 Seeing Ilya on this tour was a true serendipitous encounter. We haven’t coordinated our participation. It just happened by chance. Ilya rightly complained about a recent trip to our beloved outdoor gear shop Transa and how much it cost him. I can relate easily as I’ve done that trip last year. Right now I’m all set with the gear. 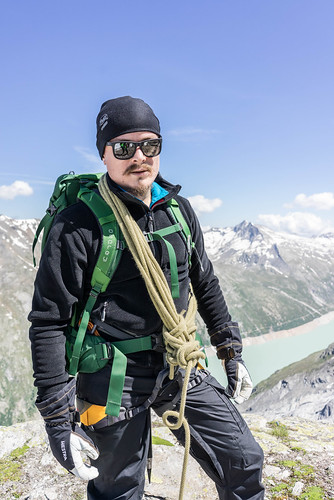 The Britannia hut is relatively large and quite modern. I admit I’m spoiled by great huts. Last year’s trek was accompanied by huts that were as good and as modern. The hut is situated close to the cable-car station so it attracts a lot of visitors, especially during a weekend. It feels more like a hostel that just happpened to be in mountains. It was packed.

Knowing that I wouldn’t fall asleep easily I decided to take a tripod with me and stay on Klein Allalinhorn until it gets dark to see the stars. The sky was relatively clear. 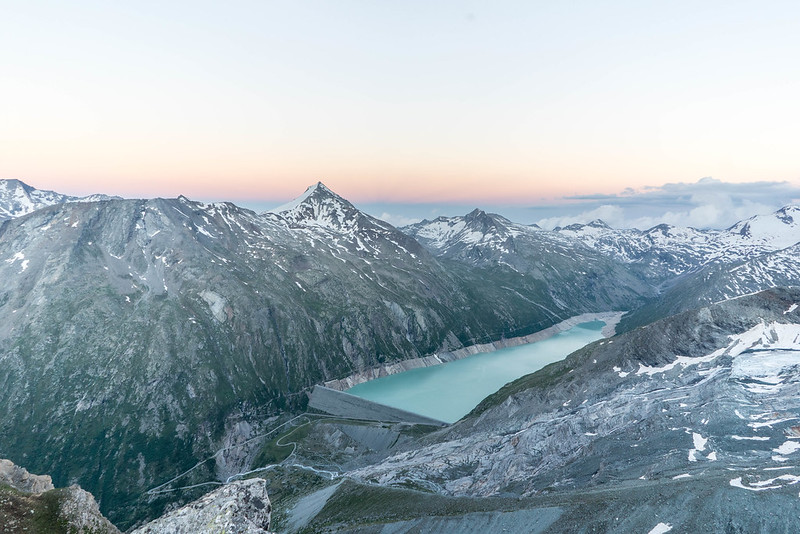 Unfortunately, I did not stay long enough to make worthwhile pictures of a starry night but I enjoyed the sight myself. Fantastic. When the complete darkness fell upon the mountains I felt a bit uncomfortable. Movements behind my back stirred alertness. A running marmot was the final drop on my nerves so I decided to get back to the hut and sit on a bench, marvelling at the sight. 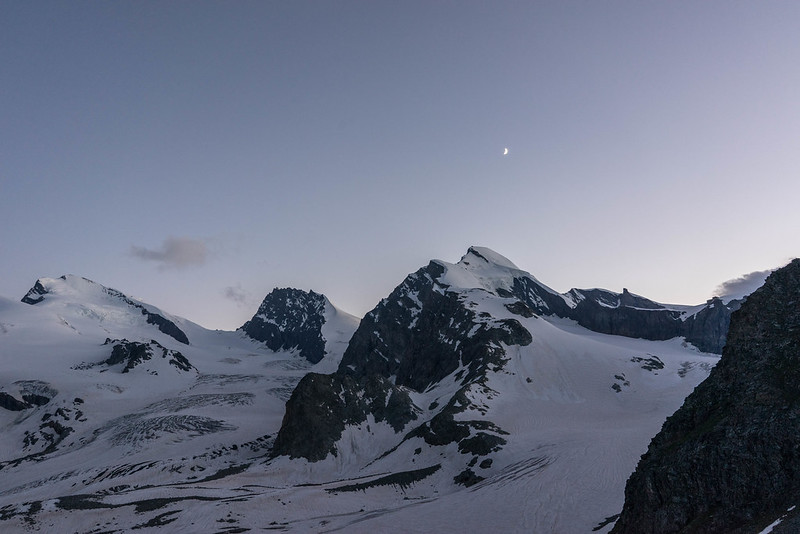 My predictions about inability to sleep came true. I could hardly sleep that night with so many people in the room. Perhaps there was also part of altitude difference playing its role. In any case we got up relatively late at 5am to have breakfast and left the hut at about 6am. 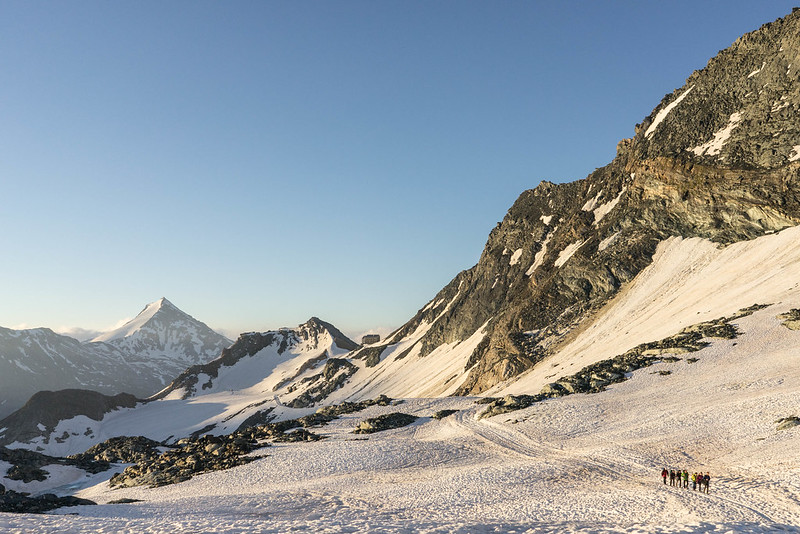 There was no rush as we were going to take a lift to Mittelallalin (3457m) station and walk from there. As it turned out, the lift opened later that we had expected so we had to wait. Furthemore, the Metro Alpin lift broke down. We waited in suspension hoping for the best. Fortunately, the team of mechanics departed with a helicopter and all technical problems were adressed in a couple of hours. Since our plans had sufficient slack even a significant delay like this didn’t prevent us from completing the tour.

After the ride with the lift the tour turned bitter. Especially on the way down. I found the way to the summit and back uncomfortably fast. At times I felt that the rope is pulling me forward, dragging the ground from underneat my feet. I still don’t understand why we had to rush so much. There were also too many other groups on the way. These two factors somewhat spoiled the atmosphere. The tour didn’t feel good anymore. It felt like we were a tourist group shown around a popular sight somewhere in a middle of a large city.

Reaching the summit did not feel anything special. It was not deserved – we cheated our way through cable cars and lifts. And there were so many other folks! 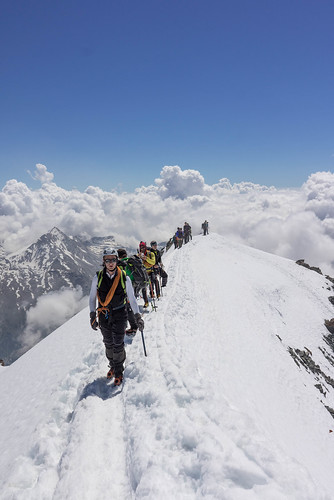 Our crew at the summit: 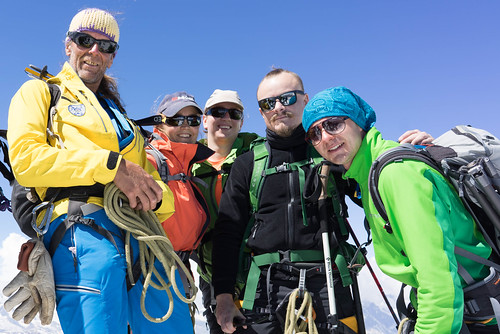 I’m not sure I’d like to visit such popular peaks again, especially during a busy time like the weekend. I am also not sure about going with groups of people I haven’t met before. It’s certainly nice to meet new people but I think I prefer to go with the people I already know and trust. Despite certain mental dissatisfaction I’m already signed-up for a follow-up trip in August. Let’s hope we’ll avoid some of the issues.

Head past to the full gallery.