Summer 2017 is off to a great start! I’ve been using every opportunity to get out and ride. Over the past few weeks I’ve managed to squeeze in 3 Uetliberg ascents / descents (with one over-the-handlebars crash), regular rides with the Zurich/Zug peloton group as well as other local rides. Last Thursday was a holiday so I took Friday off and made a long weekend to make the best out of the great weather. I cycled through canton Jura (rather a part of it) in 2 days. Jura is beautiful! And the tour turned out to be quite difficult…

The original plan was to follow Swiss National Route 7 and complete it in 2 days. The overall length of Route 7 is 280km. The route consists of 6 stages. I completed the first 3 stages on day 1 but changed the direction on day 2. Instead of going to Nyon I headed to Yverdon-les-Bains and then to Neuchatel. There was just too much climbing left on day 2 for my exhausted body.

I’m genuinely happy when my bike is prepped for the ride and the gear is all packed up: 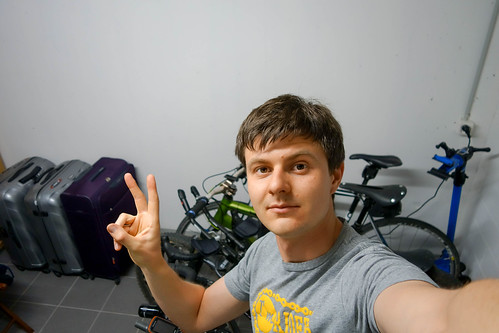 The route started in Basel. Getting to Basel from Zurich is just one train away. Luckily, the train had a separate wagon just for cyclists. How cool is that?! There are plenty of bikers en route early in the morning: 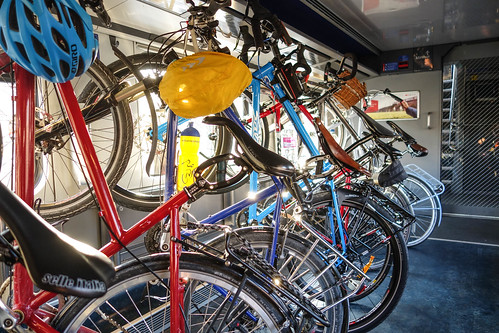 All of them hurrying and unpacking their stuff at the train station (note the bikers also on the escalator): 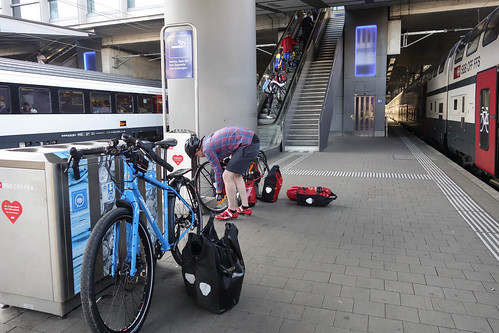 Jura feels distinct. Landscapes remind me of central France. There are plenty of fields and forests. The wind, unfortunately, also comes with the open spaces. Jura is a big departure from the alpine central Switzerland. 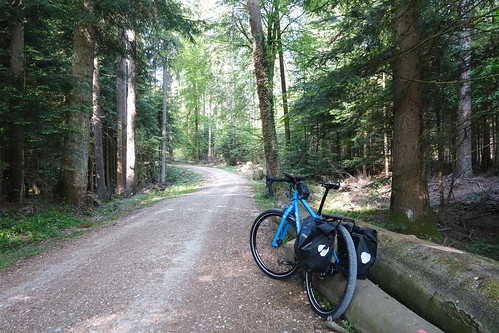 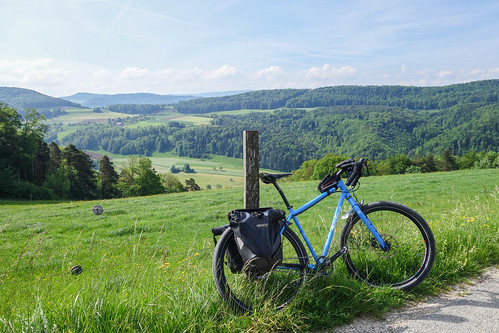 Unlike central France, Jura has plenty of steep hills to go with the lush green pastures: 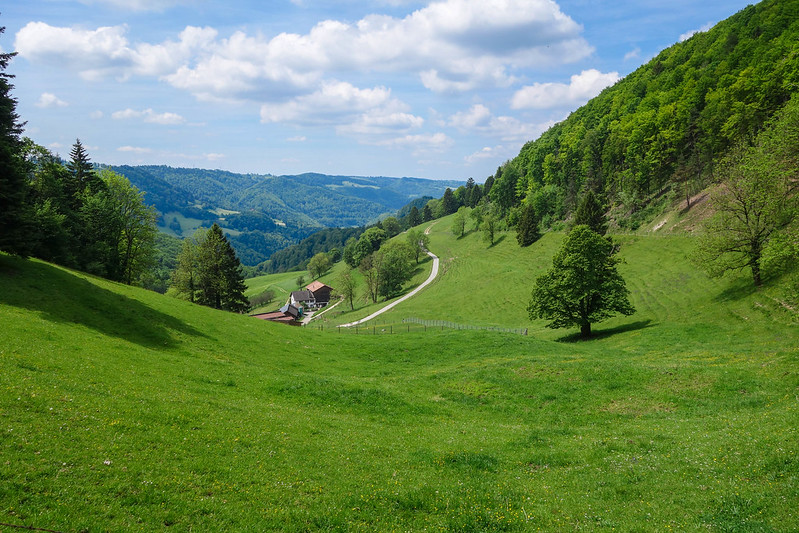 Love them or hate them, I find climbs extremely rewarding. Most climbs still don’t come easy for me but the breathtaking high-speed descents are worth every meter of challenging uphill battles. According to Strava, I have managed to reach 90kmh on day 2. It is possible that’s a measurement mistake but on the other hand I find it plausible. I was on a heavy steel tank, after all. That thing accelerates like a huge rock falling of a cliff.

I really enjoyed the scenery and the route 7. There wasn’t much motorized traffic on the roads, except for an occasional motorcyclist cohort with their obnoxiously loud pipes (how could I ever consider such an upgrade for my own motorcycle – what was I thinking???). 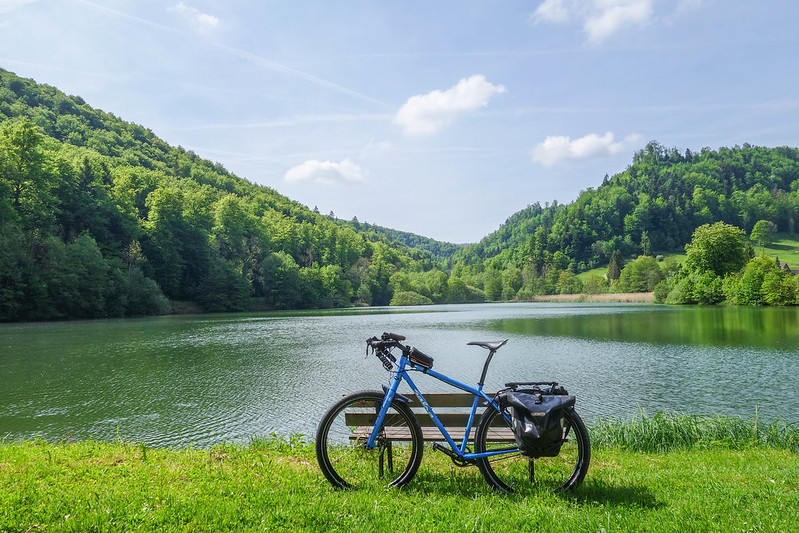 The picture below, by the way, is not of some exotic island shoreline somewhere in the Ocean – it is Switzerland, folks: 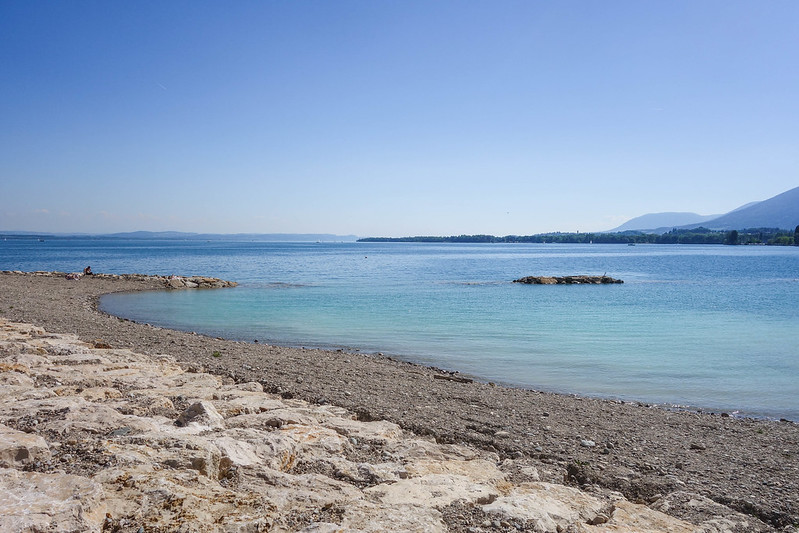 Before I began suffering from various pain points I really got into the “touring zone” and could quietly contemplate the joys of being on the open road.

Few rides are completely devoid of shortcomings. This tour could have fewer of them…

Ass. No way around it. It hurt. A lot. I should have used the chamois cream but for some reason I thought I wouldn’t experience the problem. How mistaken I was! I had suffered immensely because of it. I also plan on re-installing the suspension seat post. Comfort is important on long tours and this was just a 2 day ride! I should stop making the same mistake every year. That’s it – 2017 is the last year I suffer from chaffing. Mark my words!

Wrist. I recently crashed on a down-hill trail in Uetliberg, landing on my right wrist. I don’t think I’ve broken any bones but the recovery is slow. After a day of riding I could feel every road bump reverberating in my wrist. I hope it gets better or else I’ll have to ride exclusively in aero position on aerobars.

Hay fever. I hoped it wouldn’t strike me this year (it didn’t last year) but by the end of day I was sneezing all over the place and scratching my itchy eyes. It also gave me headache. 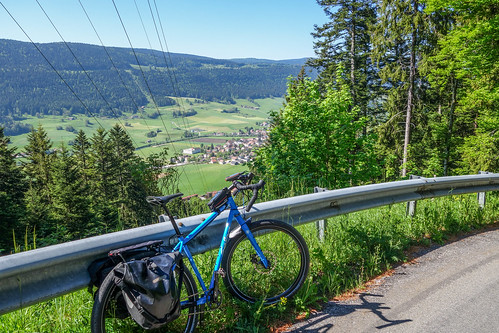 No companion. I was alone on this tour and I really missed John with whom I toured extensively before. I’m not the kind of person who can’t stay peaceful and joyful alone but riding bikes alone makes me ride too fast too soon so I end up exhausted and irritated. It’s much better to ride with a good friend. Then there’s plenty of time for great conversations and shared experiences.

Too difficult for a first long ride. The tour was a tad too much for opening the season. It wasn’t crazy long (although, admittedly, it was a record total ascent for me) but it could have been a little less ambitious. I think I would have enjoyed it a bit more then. At the moment I estimate my current optimal distance per day for a long-term tour at 100km with no more than 1000m of vertical climbing. Anything significantly longer and/or higher requires longer recovery and is likely unsustainable for more than a few days. Let’s see how this estimate changes in future…

The bike served well. I had some ideas about buying a frame with S&S couplers (to make the frame break apart) to simplify travel with the bike. I’m retiring the idea for now because the overall solution costs too much (estimated at 3500+ EUR) without sufficient value in return (admittedly, for me). Financially, I would need to travel at least 10 times on the plane to make up for the total cost of upgrades (or even more for a complete new bike). In addition, a fellow biker said he doesn’t always pay an extra fee – sometimes the bike goes in just like checked-in luggage. That makes the financial argument even more moot. 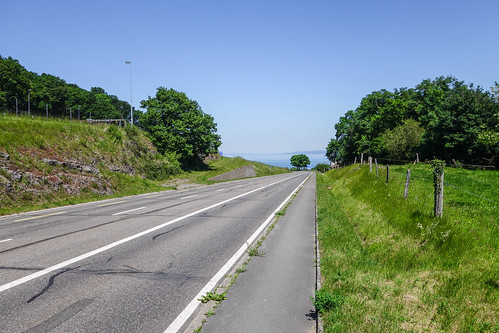 In any case, I don’t travel abroad so often and when I do I’d rather rent a fancy road bike for local rides. I’m not currently a globetrotter and I don’t plan on becoming one in foreseeable future. The convience aspect of S&S couplers is also debatable. The bike needs to be almost completely disassembled and reassembled. I currently have two bike bags: one Evoc for checked-in air travel (never used, purchased on a sale) and one for local/train travel. I think I’d rather pay an airline fee the few times I take my own bike with me than build/buy a superexpensive new bike. If anyone is thinking of a present for me, however, I’ll gladly accept one as a gift!

I’m still amazed at how good the bike works. Rohloff makes almost no noise. I should, however, urgently take care of Rohloff maintenance before the hub seizes for good. I noticed gear changes didn’t come as easy as they normally do. The hub should be serviced (oil change) every 5000km or every year, whatever comes first. I already bought the oil change kit and I’ll do it before the next ride.

I seize opportunities whenever they arise without planning too much for future. Seems to work better than the other way around. Next weekend I’m off to my first-every bicycle race. It’s a team triathlon relay race and I’m doing the bike leg. I have been training for it but I feel nervous because I don’t want to let my team mates down. I hope for the best but in the worst case expect another “Fail” post…