This is the part 3 of cyclocross bicycle build series. Jump to part 2.

I briefly mentioned in one of the previous posts that I am building this bike specifically for touring around Switzerland and Europe. Together with a couple of colleagues we went on a bike tour from Andermatt, Switzerland to Rotterdam, Netherlands along the Rhine river. I’ll be covering the tour separately in a series of posts. In this post, however, I would like to share lessons learned from the building process and the bike itself. 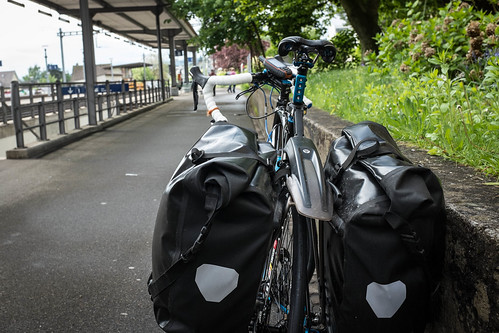 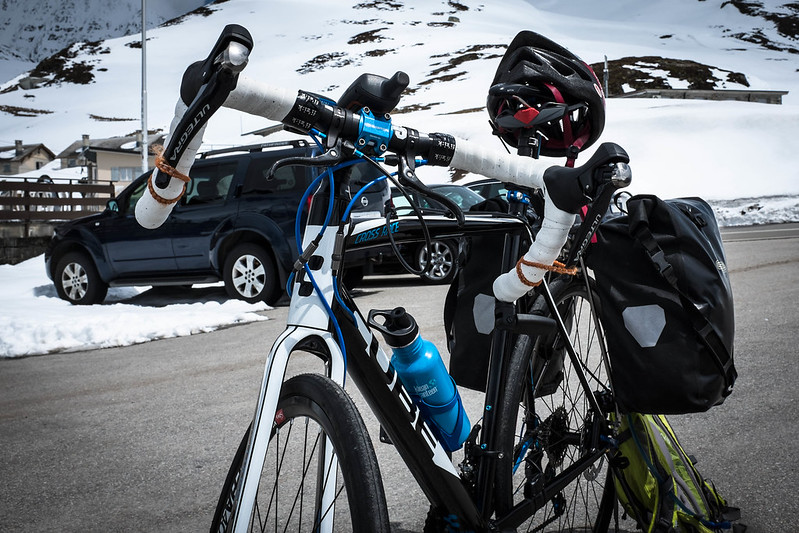 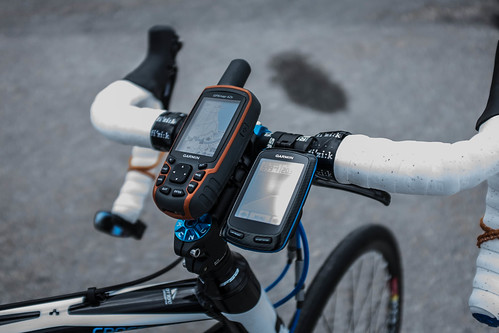 I call the bike make 1 because through the tour experience I came up with list of upgrades that are going to make the bike better for the intended purpose, hence make 2. First, it was not a brilliant idea to take an untested bike in a long tour. Of course, everything that can go wrong went wrong. Also, some mechanical parts require a break-in period. I knew this from before but still went on the new bike - who can resist new and shiny?

The first major issue were the tires. Originally, I was planning to use tubeless cyclo-cross off-road knobby tires. Knowing that most of the roads on the tour are paved I scrambled to get Hutchinson Sector 28 tubeless road tires. However, the new tires could not resist the off-road sections along the river on the way to Chur on the day 2 for too long. I had a side puncture. As a quick solution I’ve put in a tube and made a mental note to purchase suitable tires in the next bike shop along the way. I’ve made a big mistake when putting the tire on. The tire did not sit evenly so the bike convulsed uncomfortably on every revolution of the wheel. I realized where the mistake was only after I finished the whole tour. Luckily, I’ve purchased good 35c tires that day and put them on.

The off-road sections had put a lot of strain on other parts too. Later at night as I was cleaning the bike and replacing the tires I noticed that the rear rack had torn out the whole thread from the frame (the middle hole where canti-levers are mounted on canti-lever frames). The rack could not fall off completely but it could move along the axis for a few centimeters. Clearly, the frame hole was not intended for a loaded rack. I almost thought of taking train back home to take another bike. Instead, I went for the proven zip-tie solution. I used 3 zip ties to secure the failed point to the frame. Part of the solution was to send half of the panniers weight back home by post. I wanted to complete the tour completely and the zip-tie work-around, while not ideal, should have lasted until the finish line.

On a descent following the catastrophic off-road I felt the convulsions of the bike. I did not know at the time that the convulsions were caused by a misaligned rear tire. I stopped for a break to check the bike. Bolts holding the rear rack were all loosened and the rack was viciously swinging from left to right. I also did not notice the frame rack mount failure because the bike was wholly covered with mud.

Furthermore, I discovered that the rear quick release axle was loose! Talk about catastrophic failures on descents! I believe the issue had been caused by the upstand accessory. I would not recommend anyone to use it. I think the problem is fundamental and cannot be worked-around. The bike under its own weight will push on the stand and slowly unscrew the axle. Obviously, it will happen sooner on a loaded bike. But I would never use upstand again even on a lightweight bike.

Less dramatic issues included normal component wear. For example, shifting and braking cables stretch and the drivetrain must be adjusted as a result. This wear becomes noticeable after a 1000km. Gearing on the bike generally worked well and allowed me to climb all hills without an issue. However, I feel that the 50t chainring could be smaller. I had no use for the smallest rear sprockets.

I felt my saddle a bit too well and my hands told me that the handlebar could be just a tad higher. Every incorrect ergonomic setup will make itself known when you ride 140-200km per day. Muscles were nowhere close to limits as my ass and hands were. No wonder experienced tourers will tell you that saddle time is the prevalent factor rather than fatigue or leg muscles.

As I discovered the failures and inefficiencies I came up with a list of improvements for make 2 that I am going to present in a separate post. I replaced 30% of the bike and the only part remaining from the original bike is the frameset.

I can’t resist the feeling that building a bicycle from scratch is wasteful. Yes, I have learned lots of things along the way but I also ended up with lots of bike parts that I don’t need. I can understand why custom bikes become expensive. The part prices are not necessarily very high but you choose better components than the manufacturer would. And sometimes it’s impossible to know if a given part will fit in the unique combination without trial and error.